I set out on Friday morning to visit Beachy Head and see if the museum there might be a good place to hold a writing workshop in the future. I have fallen in love with Charlotte Turner Smith of late, particularly her long poem, Beachy Head, which describes this area of the English countryside in captivating detail. I particularly love reading her footnotes, which provide the scientific names for the species she describes, and the sublime descriptions of the natural world of this unique landscape. The sun was out and the skies were blue, which was a lovely break from what feels like never-ending grey winter, and I was excited to try out my new Freet shoes on a longer walk outside of the city. I jumped on a 12A bus, having just missed the limited stop 12X, with lunch in my pack. Two hours later, after winding through all the neighbourhoods of Saltdean, Peacehaven and Newhaven, was antsy to get off the bus and decided to follow the gaggle of tourists descending from the bus at the first East Dean stop (East Dean Garage, although there is no longer a garage in sight as far as I can tell) and walk down to Birling Gap through the farmland. I’d been there in October and it is quite a lovely area. They have recently reopened access down to the beach, and people were taking full advantage of the lovely weather. The Brits love a good windy walk, and a rocky beach.

I had a stroll on the beach, keeping my eyes peeled for anything that looked like it might be a fossil revealing itself in the chalk cliffs. I heard a six year old shout ‘I found a baby crab! I found a baby crab!’ but his siblings and parent seemed dubious about said baby crab’s existence. I’m inclined to believe the kiddo–those rascals are fast moving. I didn’t see anything of particular note, just lots of limpets and gulls. I considered, briefly walking along the base of the cliffs to Beachy Head, but realized that, while the tide seemed…low-ish…I really hadn’t checked and made sure it was safe to make such an attempt. It is also not entirely pleasant, or expedient, to walk on rolly, fist-sized rocks for ages.

After turning back and climbing up the metal staircase to the Birling Gap, I poked around the museum/shop/cafe (the Brits are exceptionally skilled at cramming all the things into small spaces, seeing as they live on a relatively small island) where I picked up an ordinance survey map of the area. I’m a sucker for a good map, and somehow it made me feel like I would be less likely to be trapped on the beach at low tide. Of course the tide times are not listed on said map, and by this point I had decided to walk along the cliff top anyway.

Map in rucksack, I set off into the unrelenting wind up to the Belle Tout lighthouse. Having already done that bit of the hike before, I avoided the more crowded route making a beeline towards the lighthouse, and stayed a bit farther inland, watching the skylarks (Alauda arvensis) bounce around the gorse (Ulex europaeus–which I was surprised to learn is in the pea family) with white flicks of their tail.

Beachy Head lighthouse comes into sight just past the older lighthouse. It’s an unmanned lighthouse, built to replace Belle Tout because ships were no longer able to see it in foggy or inclement conditions. After being moved back from the cliff’s edge, Belle Tout has fairly recently been converted to a bed and breakfast. Due to the speed of cliff erosion, it’s likely to need to be moved again in the next fifty years or so, or face being decommissioned as a tourist attraction and fall into the sea, joining the ships it failed to protect. 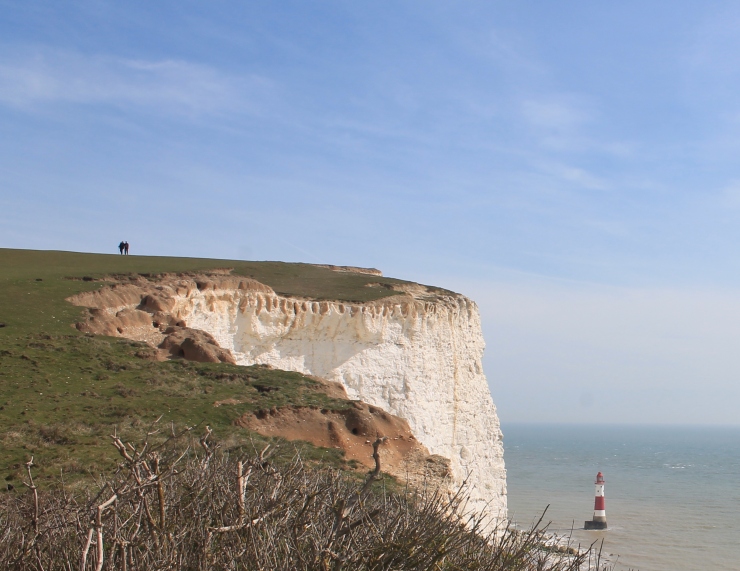 I stopped and had my lunch at the low point between Belle Tout and Beachy Head to have a bit of a break from the wind, then carried on to the summit of Beachy Head. There are several war memorials  (a ubiquitous part of the southern part of England) and trails winding through the area, although there is not a path down to the beach here. 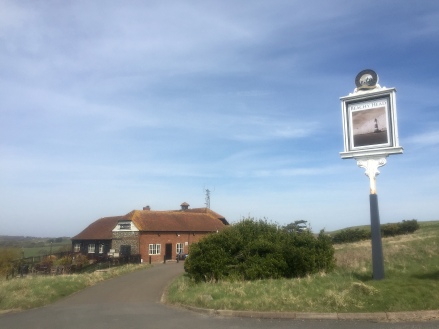 Set back from the summit is Beachy Head’s historic inn with pub, gift shop, and small museum all under the same roof. The displays in the museum feel much more dated than those of Birling Gap, although there are some neat interactive models about the light houses (it is evident that Beachy Head feels a bit smug about being the successful lighthouse). If you press the button labeled ‘Beachy Head Lighthouse,’ the sounds of a coastal storm commence and a boat moves from one side of the display to the other, not unlike a carnival game duck that you’re meant to shoot with a BB gun. If you press other button, ‘Belle Tout Lighthouse’, a ship starts off, but then nosedives rather comically, disappearing beneath the ocean. My laughter at this earned me a disapproving tut from a white-haired woman in a down vest who had come in behind me, very energetic, t-shirt wearing miniature poodle in tow. There was also a re-creation of the type of housing ancient people of the area might have lived in and some information about wildlife in the area. The display about some of the cliff dwelling birds allowed visitors to press a button and hear recordings of the various birds’ calls that went on just long enough to cross into obnoxiousness. I was tempted by a small book outlining various walks around the area, but the shop doesn’t accept credit cards and I was low on cash, so I settled for a pint of ale next door in the pub.

The South Downs Way leads from the pub back up to East Dean Road where the 12 bus stops. Along with the ubiquitous sheep and lambs, there were a few dew ponds ringed by hawthorns (Crataegus monogyna) that had attracted a female mallard (Anas platyrhynchos) and some European goldfinches (Carduelis carduelis) who needed a bath. The path crosses the road and into a slightly more wooded way, taking you to East Dean Road again, where the 12X and 12A are meant to be running every ten minutes or so. On this particular day, however, it was just me and some sheep for about an hour waiting. 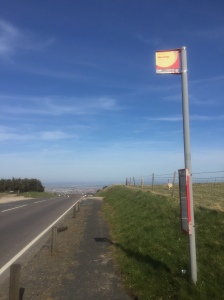 Eventually, a nice bloke came along who phoned the bus company for me because my mobile had died, and found out that there had been a traffic accident preventing the busses from getting through. Some Berliners pitched up around this time, and I shared the bad news with them. They offered to split an Uber, but when there were none available, unsurprisingly, I opted to walk down into Eastbourne, where I could see that the trains were at least still operating. Some of their party were keen to join me, but one of them, having walked enough for the day I suppose, vetoed this option. I left them to try their luck at catching a bus, and promised to let the driver know they were there if I found a bus before them. I didn’t see a single 12 bus on the walk into town, although I followed the route almost the entire way to the station, so the Germans my still be there waiting, for all I know.

The South Downs Way from Birling Gap to Beachy Head is grand. Would definitely walk again, although maybe in the opposite direction so as to have the wind at my back. (It is quite full on to be constantly buffeted about like that–it overloads the senses.)